The Definitive Guide to Unit Testing, Chapter 2: How to measure coverage

If you’re read Chapter 1 of the Definitive Guide to Unit Testing, then you already know the basics of unit testing and may have even created your first unit test. You’re probably wondering how these tests can combine to create a comprehensive test suite (and how many of these tests you’ll need to write). In this chapter, we’ll talk about code coverage and how to measure it.

How many unit tests should I write?

This is a common question for new unit testers. There are many schools of thought about the answer, but the rule of thumb is “enough tests to ensure that serious regressions are not introduced as the code is modified.” So how do you measure this?

The most commonly used metric is code coverage. It’s not perfect, but it does tell you how much of the code you’ve written is covered by tests. It is widely known that high code coverage is not necessarily good; developers can write buggy code and then unit tests that pass with the buggy code. However, low code coverage is definitely bad, because it means your test suite is unlikely to catch issues that are introduced as the code is modified.

Based on this, it makes sense to measure the code coverage for test suites to help us identify code that is currently untested, as well as code that’s unused or potentially dead. There are a number of tools available for measuring code coverage, e.g. Cobertura and JaCoCo.

For the purposes of this tutorial, let’s use Jacoco. Code coverage tools work by instrumenting the class files so they can record which lines are executed. With Jacoco, there are two types of instrumentation:

Given that offline instrumentation can give coverage information in more circumstances than the default, let’s set this up.

The first thing we need to do is to add the dependency to our pom.xml:

Then we need to add the surefire plugin to the ‘build, plugins’ section of our pom.xml:

Note that we have specified a location for the jacoco.exec file. This is the raw coverage file that is produced by JaCoCo.

Next, we will add the JaCoCo plugin to the build, plugins section of our pom.xml:

So this is the bit that defines the process, essentially split into three parts:

Now we are ready to see our first coverage report. We need to ensure that all the stages are run now that we have added extra steps from the plugin, so it’s best to run:

From here, we will get a report that looks like this:

We can find the HTML version of the report under target/site/jacoco (i.e. $/jacoco). You will notice that you can drill down into the package and the classes to see the coverage, down to individual lines: 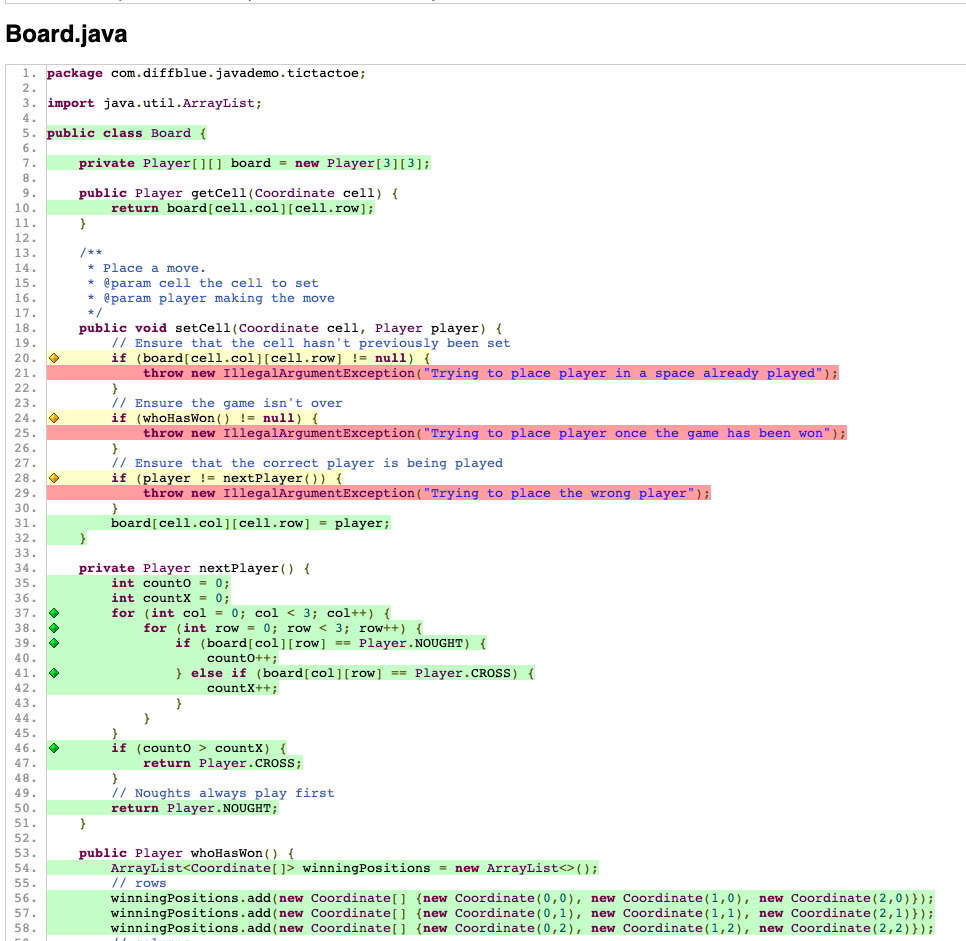 There are three basic colors for the lines:

There are more details on the coverage color coding and other info in the documentation.

The full source for this tutorial is available here.

Hopefully, this has been helpful in learning how to enable Jacoco for your maven project. In Chapter 3 of the Definitive Guide to Unit Testing, we discuss how to expand your test suite to ensure that you have comprehensive coverage. Check it out next!