What US vs. UK software developers think about automation

In the last year, we’ve surveyed hundreds of developers in the US and the UK about their preferences on topics ranging from DevOps, to testing, to the characteristics they like and dislike in a workplace, and what software quality means to them. On many things, the two groups are in agreement, but attitudes towards automation have jumped out as a point of interest—with a trend among respondents from the US to voice greater demand for automation tools, to report higher adoption of automation tools in their companies, and to have higher overall workplace satisfaction than their counterparts in the UK.

So what do these results mean for developers in the UK? Part of the secret to workplace happiness might be related to automating the work you don’t like doing.

On average, US developers work longer hours than their UK counterparts, but they also earn higher salaries. According to our March 2020 survey, 32% of US respondents work 45 hours or more a week, compared to 14% of UK respondents. Survey results indicate US developers earn about 28% more than UK developers (£72,860 on average, compared to £56,938). This differential has been corroborated by other studies showing US developers make anywhere from 30% to over 60% more (source).

So what might increase job satisfaction? Our survey suggests that US developers attribute more importance to 1) the availability to automate repetitive tasks and 2) their organization’s willingness to adopt new technologies (compared to UK developers) as related to overall job satisfaction. Let’s take a closer look at both organizational and developer preferences for automation in the workplace. 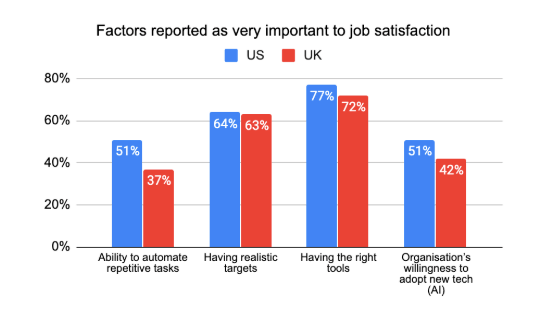 What do developers want to see automated? What do organizations want to automate?

When it comes to what to automate, developers in the US and UK have similar experiences and preferences. The majority (over 60%) of both US and UK developers would most like to see automation introduced to the tasks of finding bugs and software testing. Over 65% of both US and UK developers find writing unit tests mundane, and over 80% would rather spend time working on creative tasks, such as developing new product features, than on repetitive tasks. Survey results also suggest a common interest in using a tool to assist with the process of developing unit tests, with nearly 70% of US developers and 60% of UK developers responding as very interested.

Despite this, amongst both groups, testing was least likely to be reported as a top organizational priority compared to other phases of the DevOps pipeline. 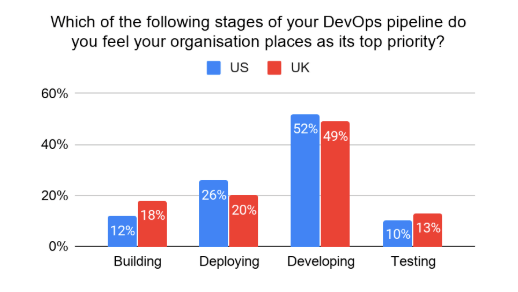 So where is the rest of the gap in workplace satisfaction? The explanation might partially lie in differing rates of AI adoption.

AI Adoption Maturity in the US vs. UK

Survey responses indicate the rate of full organization adoption of AI for software development in the US is double the rate of the UK (see figure below), while partial adoption rates are about even. In terms of future forecasting, a majority of US developers (53%) strongly expect to use AI to improve productivity within the software engineering team by 2025, compared to 31% of UK developers. 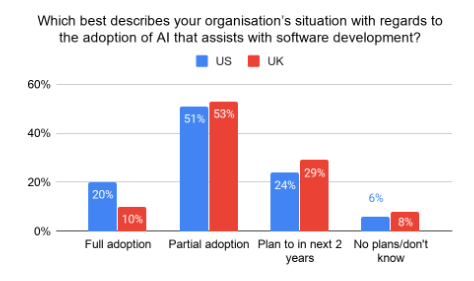 As organizations increasingly integrate AI into their operations, ensuring the right talent to support these initiatives continues to be key. In our survey, a majority of both US and UK respondents reported challenges finding qualified developers to join their team, indicating a talent gap may already exist.

Survey results also suggest agreement amongst respondents that a lack of skilled developers contributes to delays and lowers software quality. A majority of respondents believe there is room for improvement regarding the quality of software their organizations produce, with an average of 77% of US and 86% of UK respondents responding affirmatively. 63% of all respondents believe the top benefit of unit test writing is the improvement of code quality. In the face of a talent gap, tools that allow developers to more quickly and accurately write test code could serve as an immediate solution.

Despite differences between US and UK developer experiences and practices, overall there seem to be commonalities in their attitudes towards the automation of repetitive tasks and their opinions of unit test writing. One of the most consistent patterns across responses was agreement that their organizations could improve their testing and software quality, and interest in tools that would assist with the unit test writing process. Companies that provide these benefits will likely find themselves with more satisfied development teams.

For developers in the UK, the surveys suggest it might be time to start pushing for the automation tools your peers across the pond are currently enjoying.